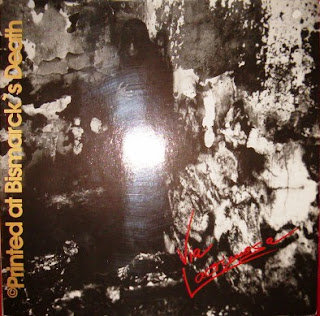 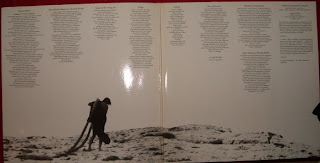 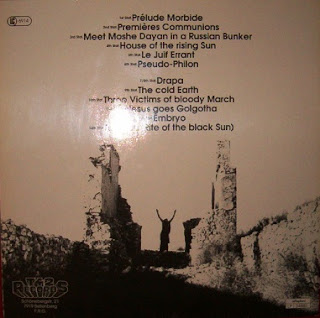 Darkwave/Avantgarde band from Germany founded in 1983. The band still exists but didn't release anything since 1998.
Via Lacrimosa was released in 1991, it's difficult to describe what it sounds like. There are elements of Dark Wave, Neoclassic, Ambient, Ritual, Neofolk; but it's not lofty or cheesy(like countless Neofolk and Neoclassic Projects), the sounds were created with real instruments, the lyrics are great.


(I'm looking for older releases of the band, so if anyone has one, please put it online and send me a link. That would be great.)
Eingestellt von Weird Cheese um 12:03

Hi Weird Cheese,
this is Ansgar, Band Member of PaBD. Nice post! one slight correction though: We released a new version of Meet Moshe Dayan in 2005 - and still work on new stuff...
If you are interested in older stuff - let's get in touch, via my space e.g.?

hello , Mr. weird Cheese. greettings from Mexico City. about the link , this is not working. Can you re-load this one again, please?? on this city is so imposible to find it, i have been looking this ona by years. thank you , bud.

Hi Weird Cheese!
Great post,such a rare band..
Could You,please,reload this material,cause rapidshare said that file was not found on server.
It is so hard to find this album...
Hope You will help me.
Thanks!

“No, Potter, you can’t have it back yet,” Professor McGonagall told him the twelfth time this happened, before he’d even opened his mouth. “We’ve checked for most of the usual curses, but Pro¬fessor Flitwick believes the broom might be carrying a Hurling Hex. I shall tell you once we’ve finished checking it. Now, please stop badgering me.”
To make matters even worse, Harry’s anti-dementor lessons were not going nearly as well as he had hoped. Several sessions on, he was able to produce an indistinct, silvery shadow every time the boggart-dementor approached him, but his Patronus was too feeble to drive the dementor away. All it did was hover, like a semi-transparent cloud, draining Harry of energy as he fought to keep it there. Harry felt angry with himself, guilty about his secret desire to hear his parents’ voices again.
kung fu uniformengineering companies brisbane

They drank the butterbeer in silence, until Harry voiced some¬thing he’d been wondering for a while.
“What’s under a dementor’s hood?”
Professor Lupin lowered his bottle thoughtfully.
“Hmmm … well, the only people who really know are in no condition to tell us. You see, the dementor lowers its hood only to use its last and worst weapon.”
“What’s that?”
“They call it the Dementor’s Kiss,” said Lupin, with a slightly twisted smile. “It’s what dementors do to those they wish to destroy utterly. I suppose there must be some kind of mouth under there, because they clamp their jaws upon the mouth of the victim and — and suck out his soul.”
supplements for menopausehigh end replica watches

Harry lay flat on his back, breathing hard as though he had been running. He had awoken from a vivid dream with his hands pressed over his face. The old scar on his forehead, which was shaped like a bolt of lightning, was burning beneath his fingers as though someone had just pressed a white-hot wire to his skin.
He sat up, one hand still on his scar, the other reaching out in the darkness for his glasses, which were on the bedside table. He put them on and his bedroom came into clearer focus, lit by a faint, misty orange light that was filtering through the curtains from the street lamp outside the window.
home safescure erectile dysfunction

mobile home dealersHervey Bay Accommodation
He let out a long, slow breath and stared up at the brilliant blue sky. Every day this summer had been the same: the tension, the expecta¬tion, the temporary relief, and then mounting tension again … and always, growing more insistent all the time, the question of why noth¬ing had happened yet. …
He kept listening, just in case there was some small clue, not rec¬ognized for what it really was by the Muggles — an unexplained disappearance, perhaps, or some strange accident … but the baggage-handlers’ strike was followed by news on the drought in the Southeast (“I hope he’s listening next door!” bellowed Uncle Vernon, “with his sprinklers on at three in the morning!”); then a helicopter that had almost crashed in a field in Surrey, then a famous actress’s di¬vorce from her famous husband (“as if we’re interested in their sordid affairs,” sniffed Aunt Petunia, who had followed the case obsessively in every magazine she could lay her bony hands on).

As Michigan Republicans headed to the polls Tuesday morning, President Obama delivered an aggressive defense of the bailout of the auto industry and his presidency in general, harshly criticizing GOP frontrunner Mitt Romney - though he never mentioned him by name.
payday loan companiesvaporizers